Pipolotti Rist is a Swiss visual artist who works in video, film and moving images that are usually displayed as projections. She is known to be a feminist whose work centers around gender, sexuality and the human body. Her works are full of bright colors and tends to have a a quick speed to them accompanied by some sort of sound that conveys an underlying bubbly happiness.

I find Rist’s work fun and bubbly! Her personality is clearly conveyed in all her work and her theme’s are consistent. Her series Pickelporno is provocative yet alluring. When I first came across her work I wasnt quite sure what I was looking at- but upon realizing I was of course a little flustered yet humbled, which I feel is the response Rist wants her audience to have. Paul Pfeiffer is an American sculptor, photographer and video artist born in Honolulu, Hawaii. He is known for his usage of computer technologies and the way he captures the effect of mass media on the human consciousness. Pfeiffer’s The Four Horsemen of the Apocalypse is a photographic series that focuses on only the basketball players ( usually only one) with everything else is edited out- onlookers, other players, the basket ball, even the name and number on the jerseys. Pfeiffer’s work is said to invite viewers to exercise their imagination- to make his onlookers experience certain feelings and emotions.

I find Pfeiffer’s work interesting. Before reading about him I was confused by his Four Horsemen series simply because I did not understand the photographs at first. I though they were simply photos of basketball games, and I thought Pfeiffer was just a talented media camera man. But, upon reading about his work I realized that he had evoked my imagination- I subconsciously assumed audience where there and that this was a live basketball game before noticing that everything was edited out. I even did not notice the jersey’s being blank. Though his work is sort of confusing in the beginning, after reading about him I have an appreciation for his work because it does what he claimed he wanted it to do. He can evoke your imagination or even fear in his sculptures of recreated Hollywood thrillers. Bill Viola was born the 25 of January and is a contemporary video artists, meaning all of his work are composed videos of sound, electronics and images. His work (from video tapes to video installations to sound environments to electronic music performances) focuses on fundamental human experiences like birth and death and the aspects of consciousness. and usage of the sense as tools to discovering self-knowledge.His video installations can be seen in galleries all over the world, his video channels broadcasted in cinemas and his texts published and translated into various languages for all to experience. Music is also a huge part of Viola’s works, having performed in major assembles with composers, as well as creating videos to accompany songs with, for example, the rock group Nine Inch Nails in 2000. Viola is considered to be the leading artist in a new generation of artists who’s expression depends on what is called New Media, which refers to the on-demand access of to anything on though any device. “New media” includes almost everything digital that has been manipulated, interactive, net-workable,etc.

To me, a lot of Viola’s work connects on a spiritual level, which I think is fascinating. Viola uses spiritual traditions from Zen Buddhism to Christian mysticism and combining them with Western art, Viola creates a way to communicate to viewers in personal ways on a large scale. His videos through me for a loop at first and were slightly off-putting, but once used to certain things not found in many art pieces like the sound for example, his work does speak to you on some other, more spiritual, way. But at the same time, Violas work comes across rather dark and very powerful and almost overwhelming, like Acceptance  http://www.youtube.com/watch?v=UJQmV8aPNao
from his Ocean Without a Shore series that depicts death and how the dead are undead through recordings of bodies against a black elusive back ground and water slowly beginning to gush from their bodies. That series in contrast with The Quintet series, where viewers watch the faces and reactions of five actors very slowly to see every minute detail of their acting with the accompaniment of no sound http://www.youtube.com/watch?v=As7OtWMYPRc demonstrates how Viola’s work can vary while still sending similar messages. 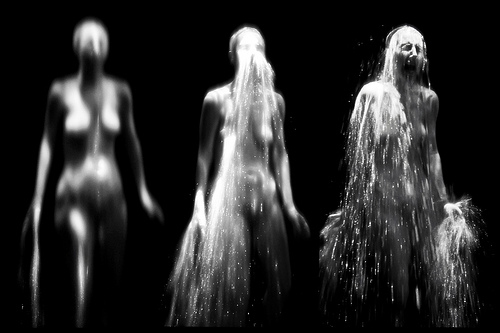 Alec Soth is an American photographer born in Minneapolis, Minnesota. He is most known for cinematic and folklore style photographs and the way he is able to take photos of strangers and tell a story. His photographs have been featured in both solo and group exhibitions all around the world, and Soth now even has his own publishing company called the Little Brown Mushroom. He has won numerous fellowships and awards, including the Guggenheim Fellowship in 2013.

I really like Soth’s work mainly because of the relationship and story he is able to create in one photograph. He takes the mundane and every day that you may see walking down the street and captures it and makes it the focus of a photo, giving it a story and making it rather compelling. When looking at his photos under NIAGARA ( and in general all of his collections), the viewer searches for a story that you automatically feel is there. Or, in his Looking for Love collection, you end up making stories of the miscellaneous couples in each photo- like who they are, how they have met, how long they have been together, what their relationship is, etc. George Fruelin is tired of his boring typical high school life. It is senior year, and his popularity is nowhere near improving. No one notices him and he is invisible to every girl on the entire planet. Except Abigail. The only problem is, Abigail only exists through a random video/chat website George found randomly one night while trying to download movies onto his computer. She’s funny. She’s smart. She’s mysterious. She’s perfect. But she’s halfway across the world. Does George have what it takes to make this out of this world girl his own?